Magnetism is a physical phenomenon on which many applications rely. It is the basis of not only electric motors and actuators, but also plays an important role in electrical circuits.

The reluctance is the magnetic analog to resistance in electrical circuits. The only difference is that a resistance dissipates energy, while reluctance stores it. The magnetomotive force (MMF), Reluctance and the Flux relate through Hopkinson’s law:
$$\mathcal{F}=\mathcal{R}\Phi$$ 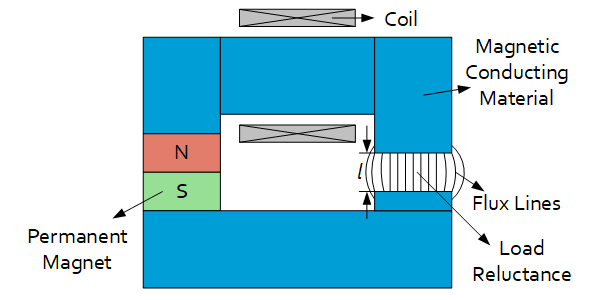 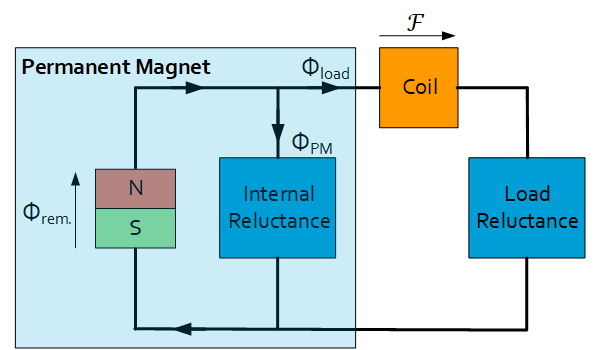 The magnetic energy stored in a magnetic circuit can be derived by using Faraday’s law of inductance to calculate the electrical energy required for a coil to create that magnetic field:

The equation above is generic and also applies to PMs.
It has to be noted that for a magnetic field produced by a coil with a constant MMF, a change in reluctance also results in energy transferred to and from the coil as evident by the equation above.

The reluctance force is deduced by deriving the energy stored in the magnetic field by displacement of the load reluctance according to:
$$F=-\frac{\partial E}{dl}$$
Due to the large permeability of the magnetic conducting material, its reluctance is assumed zero. For a magnetic circuit driven by a coil, the MMF is assumed constant. The general force equation is given by:
$$F=\frac{\Phi_{load}^2}{2A_{load}\mu}$$
For the case that only one flux or MMF source is present, the reluctance force is given by:
$$F_{coil}=\frac{\mathcal{F}^2}{2A_{load}\mu}\left(\frac{1}{\mathcal{R}_{pm}+\mathcal{R}_{load}}\right)^2$$

The Lorentz force acts perpendicular to a moving charge moving through a magnetic field. The force acting on a wire is given by:
$$F_{Lorentz}=I\ l\times B$$