Every part of a mechanical system, from actuator to end-effector, comprises damping. This sheet gives an overview of ways damping can be defined and how these definitions are related to the linear dimensionless damping coefficient $\zeta$.

Damping in mechanical systems is the extraction of mechanical energy from the motion in the system, usually by conversion of potential energy into heat. Therefore it can be regarded as a loss of energy. However, the positive effect of damping is that it attenuates oscillations due to internal resonances. Damping is often modeled as a dissipation force proportional to the velocity, $F=d\dot{x}$, which is known as viscous damping. However the underlying principle is more complex and nonlinear in nature.

A frequently used measure for damping in a system is the damping ratio. It characterizes the damping in a linear second-order system as the ratio of physical damping coefficient $d$, over the critical damping coefficient $\zeta=\frac{d}{d_c}$ with $d_c=2m\sqrt{\frac{c}{m}}$. This corresponds with the level of damping that the response becomes non-oscillatory. Note that this is a linear definition of damping, for which a model of the underlying system is needed.

Another interpretation of damping is given by the quality or Q factor, which is more widely used in other fields of physics. It is a measure for how under-damped the system is. It can be retrieved from frequency-response data: 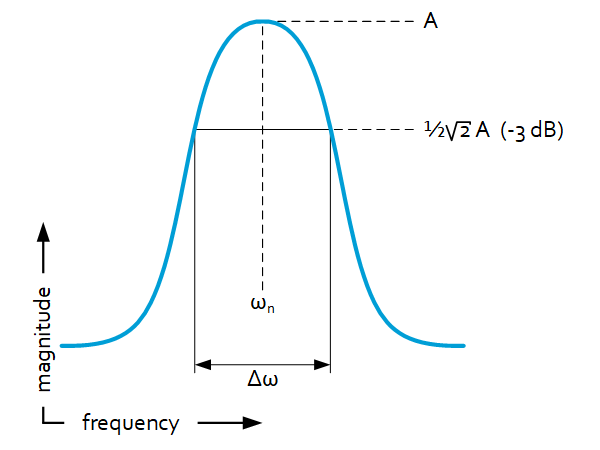 Another interpretation of Q is the rate of energy loss relative to the stored energy in the resonating system:

Damping ratio can be retrieved from resonant time-response data by means of the logarithmic decrement $\Lambda$, which can be calculated from the amplitude of peak responses:

The damping ratio is calculated by:

The dissipation factor (DF), which is often expressed as a percentage, is the reciprocal of the Q factor:

Often called attenuation $\alpha$, is defined as $\alpha=\zeta\omega_n$ [rad/s], which represents the exponential decay of the oscillation.

By applying a harmonic load F to a system, the response (deflection x), is known as the loss angle, which is a measure for damping. It relates to the damping ratio by $\zeta=\frac{\tan{\delta}}{2}$.

By dividing the amount of energy dissipated in a harmonically excitated structure divided by the work applied to it, the specific damping capacity $\Lambda$ can be calculated:

The interpretation of this measure can be clarified by means of the hysteresis curve: 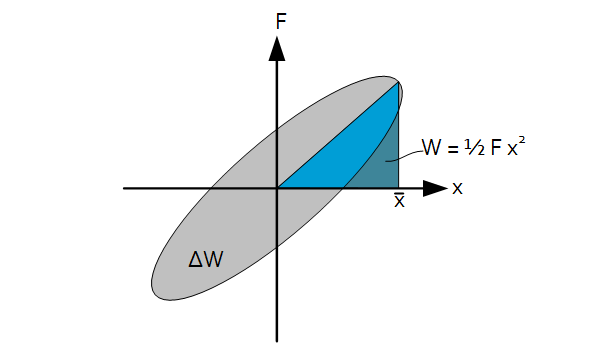